After consecutive reissues of Peruvian garage and psychedelic rock from the sixties and seventies, Discos Monterey couldn’t miss the chance to resurface two of the most emblematic records of the period: “Segundo Volumen” (1967) and “Docena 3” (1968) by Los Shain’s, the “conjunto de conjuntos” (the band among bands), as they were called back then. Those fifteen-year-olds started in mid-1964 and would go on to make an impressive musical career that would make history with just four records for the IEMPSA label.

They recorded their first LP “El Ritmo De Los Shain’s” (1966), halfway between instro rock and garage. Its main architects – Enrique “Pico” Ego Aguirre, on guitar, and Gerardo Manuel Rojas, on lead vocals – introduced psychedelia in their second work called “Volumen 2” (1967). They were accompanied by Beto Tataje on second guitar, Juan Carlos Barreda on bass, and Carlos Manuel Barreda on drums. The album contains, for the most part, their own songs, standing out their luminous melodies and a certain beat they themselves considered to be a product of the “enfermedad” (sickness), immersed as they were in “la onda”, the groove of the era. An impressive album that also stood out for its sound and for the pioneering presence of the “fuzz tone” among other effects such as the tape echo or a harmonic distorter that were revolutionary in their day and that today still have an impact due to their enormous power.
(Alex Magic Pop) 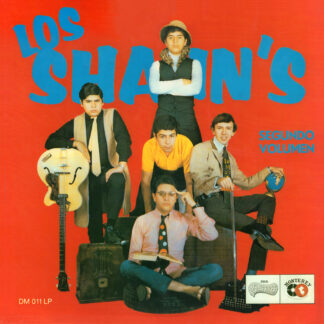