The star of Ernesto Djédjé started rising in the late 60s, when he became the guitar player and leader of Ivoiro Star, founded by Amédée Pierre, star of Dopé, the leading musical style at the time. Annoyed by the “congolisation” of the Ivorian music that was taking place within the band, Ernesto left the group and emigrated to Paris in 1968 to record his first few singles arranged by Manu Dibango and influenced by Soul, Rhythm & Blues and Jerk. Those recordings reflect the musical mood at that time which was dictated by two musical trends within the Ivoirian scene: Traditional music, embodied amongst others by Amédée Pierre on one hand and imported music from the States, Cameroon and Zaïre on the other. And while the first trend was generally neglected, the youth fully embraced the second and as a result bands such as “Les Black Devils”, “Djinn-Music”, “Bozambo”, “Jimmy Hyacinthe”, shot to stardom overnight by recording mainly funk and disco music. It is within this context that Ernesto would draw the inspiration for a future formula.
Returning to Côte d’Ivoire in 1974 Ernesto began looking for like minded musicians to form the mighty “Ziglibithiens”. Diabo Steck (drums), Bamba Yang (keyboards & Guitar), Léon Sina (Guitar) and Assalé Best (chef d’orchestre and Saxophon) would become the core of the group and together with Ernesto they began thinking of ways of combining the rhythms and chants of the Bété people and fuse them with Makossa, Funk and Disco and create a musical style that was both Ivorian and International. He called his experiment Ziglibithy and his first two albums, immortalised at the EMI studios in 1977 in Lagos and released on the Badmos label, took West Africa by storm turning Ernesto Djédjé into an icon overnight and one of the legends of African music.
Ernesto Djédjé died in mysterious circumstances on June 9th, 1983 – at the age of 35 – shocking the whole Ivorian nation.
And although the end came abruptly, it didn’t come soon enough, and Ernesto had time – within 5 albums – to cement his legacy as one of the most innovative artists the Ivory Coast ever produced.
The song Zighlibitiens, brought to Colombia by an aeronautical mechanic in the early 1980, would become a huge hit on the Caribbean Coast. Renamed “El Tigre” by locals soundsystem operators – certainly due to the Badmos logo – that particular song would reach legendary status in Barranquilla and Cartagena. Setting fire to uncountable local parties, it has become one of the most sought-after Album in that part of the world. And so, while Ziglibithy has mostly disappeared from the airwaves of its country of birth, on the other side of the Atlantic, its fire continues to shine bright. 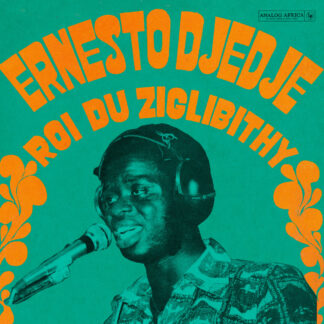