Fourth pressing limited to 100 hand-numbered copies with exclusive red cover.
In August 1967, The London Dri entered Audio Sonic Sound Studio to record what would be their only 45-rpm single. ‘Life in Your Hand’, an original song written by guitarist Bruce Thomas, was backed by ‘Dona, Dona’, a re-working of a Jewish folk song with a new arrangement by the group. Released on the Yobo label, the two songs represented the entire released output by the Los Angeles-based combo. For years, if recalled at all, The London Dri would be remembered for that lone single.

Between their 1965 formation and their disbandment in 1970, however-and in between hundreds of performances and even a movie appearance-The London Dri recorded several other songs that, had they been released, would certainly have earned the group a more prominent standing today among Hollywood rock groups of the era. One of the most remarkable tracks doubtlessly is “This Is Life”, practically the London Dri’s version of the Caretakers Of Deception’s legendary garage/psych classic “X+Y= 13”, Others, such as “The Other Side Of Soul” and “Western Skies” are both melodic period westcoast rock pieces with excellent psychedelic guitar playing. “Hurry”, “Wanting To Know You” and “Sorry” are all from The Misunderstood school of sound and show some clear shades of UK Freakbeat/Psych bands such as The Game, Mike Stuart Span or The Attack.

The only cover version is an over 5 minute long rendition of Big Brother & The Holding Company’s “Combinations”. London Dri had it all: From Garage-rock to classic US Psychedelic to UK styled Mod/Psych. Finally here’s the band’s legacy – 11 killer tracks in their distinctive London Dri style. 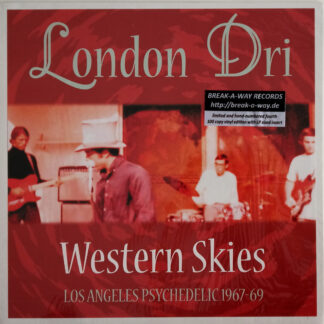