Another lost gem of French underground music, Delired Cameleon Family was originally conceived as the soundtrack to Pierre Clémenti’s “Visa de censure no X”, and was originally released as an LP in 1975.

Cyrille Verdeaux was, of course, the main force behind the better known French band Clear Light. Verdeaux was born the 31st of July of 1949 in Paris.
At the age of 15 he became a student at the French National Conservatory of Music, specialising in studies of harmony, composition and piano. He won three times the first prize in student composition. After the 1968 student riots he left the Conservatory to join a band as a keyboardist. In 1972 he released “Clearlight Symphony”, thus forming the band Clear Light to tour through Europe perfroming his symphony. Clear Light would release three more LPs through the 70’s, and also the soundtrack to “Visa de censure”.

The music form Delired Cameleon Family, as it has been told somewhere, “is the synthesis of piano’s technical, epic scales, psychedelic wah wah guitar sounds and electronic <

We are proud to add this great experimental trippy soundtrack to the Wah Wah catalogue, reissued in cool vinyl, with remastered sound, housed in a faithfull reproduction of the original sleeve and complete with an insert with liner notes and photos. Only 500 copies pressed, so better get yours before they are gone! 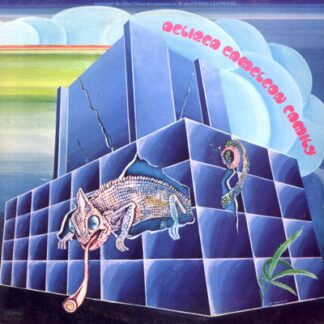