Mexican rock had a strong renaissance in the eighties, when most bands, majorly coming from the prog scene, turned to Spanish language again. One of the big acts from that era was Jorge Reyes’ led Chac Mool. Chac Mool counted on its ranks with Carlos Alvarado, who was an accomplished musician on its own and who would record one of the most interesting electronic prog albums of the era, on which Reyes also collaborated. Originally released on mexican private label Momia in 1980.

“Carlos Alvarado’s Via Lactea (Milky Way) is now reissued on vinyl 35 years later. Eurock was especially interested in electronic Cosmic Music exploring both the inner and outer spaces of sound and consciousness. Of all the great music I had heard from Germany’s Klaus Schulze to Tangerine Dream & Spain’s own Neuronium, the album by Carlos stood apart from the rest.

In a sense, it combines the best of worlds, celestial sonic exploration and deeply emotional spiritual listening. A concept album, the track titles convey the musical journey Carlos undertaking – The Structure of the Universe, Garden of the Divine Presence, Into the Light, Man in Eternity, Meditation Post Atomic & The Lark and the Virgin. He employs a vast array of classic electronic instruments – ARP, Korg, Yamaha, synthesizers, Crumar Orchestrator, Mellotron, Piano, Flute & Tapes. The album also features notable guest musicians such as Jorge Reyes and Arturo Meza.

The music you encounter upon listening is not easy to describe. Simply listen, close your eyes and imagine yourself in a majestic Holy Shrine. The sound of the earth’s heartbeat is slowly pulsating in different rhythms; solar winds from out of the sky are alternately wafting then gusting through the open spaces. In accompaniment, elemental sounds of nature fill the air, comingling with melodies from the cosmic spheres and the warm tones of exotic analogue electronica. All of these elements ultimately alchemize into an immaculate creation, a galactic symphony of Birth, Life, Death & Eternity.

Via Lactea is a masterpiece, fusing the technological magic of early electronic tone colors with the spirits of the ancient ones beautifully. Since 1980, Carlos has continued making music as well as running his own label Momia Records. To date the label has released 12 albums by various groups, as well as projects documenting his various other diverse musical incarnations. Carlos’ latest release in 2013, entitled La Musica de los 7 Chakras, offers yet another transcendent musical listening experience.”

The Wah Wah reissue, made under license from and with the help of Carlos Alvarado himself, comes with remastered sound and will include one bonus track not on the original LP. Like the original, it will be housed on a flapped envelope style cover, this time in luxury silk screened metallic copper cardboard. Features a colour insert with photos and notes, plus a bonus Momia sticker based on the one given on the original release. Limited edition, only 500 copies pressed! 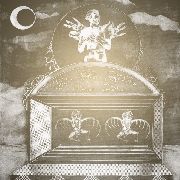