The Bättre Lyss project was born during 1973-74, when mutual friends Rolf Hammarlund (vocals, bass) and Christer Palmquist (vocals, acoustic guitars, piano) started to write songs sung in English. Their friend Carl Henrik Gårdstedt was studying in the Film and Radio School (Dramatiska Institutet) and had access to a studio in the school. He began to record their songs, joined by old friends drummer Rolf Johansson and guitarist Bo Klackenberg. Soon after, the lyrics were changed to Swedish and Rolf Johansson contributed with more songs. They wrote lyrics about things that happened in Sweden and around the world. Tragic things like the military junta murdering people in Chile, the Vietnam War, the weapon industry and smaller subjects, like people living in the bottom of the society.

That’s when they decided to record an album. Helped by some talented friends, including THREE electric guitar players (among them Anders Nordh of LIFE fame) and a flute / sax player plus an organist, they registered “Till Den Sträng…” on a 2-track machine in “Statliga Dramatiska Institutet’s studio”. The result was stunning and was released as a private pressing in 1975. For this new reissue, the band members have decided that all the royalties will go to charity (Cancerfonden).*Master tape sound, insert with liner notes and photos. 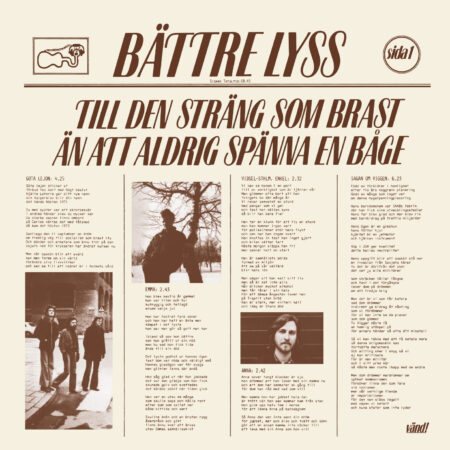