There’s a war on

The Rainbow Press evolved from The Continental Divide, a college band from New York comprised of members from two previous British Invasion groups: The Group and The Specs. They were Bill Yergin on drums, Dave Troup on bass, Larry Milton on electric piano and 12-string guitar, Marc Ellis on guitar, Charlie Osborne on organ and Joe Groff on vocals. All the members sang vocal harmonies and the twin electric piano / organ action gave the band an unusual and cool sound.

In 1968, Audio Fidelity approached them and a contract was secured. The band changed their name to the more groovy sounding The Rainbow Press and sessions for their first album started at Radio City in New York. “There’s a war on” saw the light in 1968 on the Mr. G label (the “hip” branch of Audio Fidelity) and it’s hard to believe this perfectly recorded and sounding psychedelic beauty was recorded by college students!

Insert with liner notes telling the band’s story for the first time.

Step Aboard – A Simple Way – Cyclic Epic (The Song Of The Barnegat Mosquito) – Better Way – The Girl That Cannot Love – There’s A War On – Lightning Streak – I’ve Found Someone – Our Country’s Still O.K. – No One Follows The Daytime 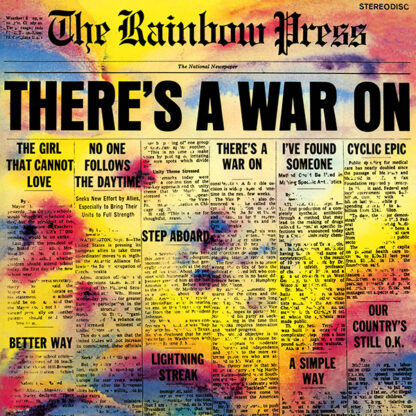