Originally released as a small private pressing in 1977 (now impossible to find), here’s the first ever vinyl reissue of this collectable hard-rock album by Marquee favourites NATIONAL FLAG.

*Sourced from the original masters
*Insert with liner notes and photos

“Defined by their good time guitar licks and blazing rhythms, this delight from the UK seemed poised to hit the big time, yet never did. They’re a riveting combination of Grand Funk meets Lynyrd Skynyrd, combined with the sensibilities and smart lyrics of The Doobie Brothers, along with the swagger of Neil Young & Crazy Horse…” – Jenell Kessler

National Flag formed in Kingston in 1973 and they were a big noise for brief period around London in 1975/76. They quickly developed a strong following especially at the Marquee club where they were resident band in summer 1975. Such was their live reputation they were invited to Tokyo and toured Japan in summer 1975 appearing on TV & Radio, headlining the infant Fuji Rock Festival & opening the World Rock Festival in Kyoto with the New York Dolls & Jeff Beck.

“Thank You & Goodnight” was recorded between 1974/76 at EMI Manchester Square, Decca Hampstead with Nick Tauber (Thin Lizzy) & Fulhams Milner Sound with a soon to be famous Julien Mendlesohn (Elton John, McCartney). Aprox. 100 copies were pressed as a homemade edition in 1977 and the album became a myth. Its reputation and rarity value has grown over the years and is now sought after by keen rock fans, Marquee fans and 70s record collectors AND its actually a real gem…Glorious. That same year, band members Danny Edwardson and Seamus Sell were also responsible for the KPM library album “Rock On”, for which they used and recycled some riffs of National Flag songs.

National Flag should have been huge, but somehow they escaped a record deal, the anecdotes are endless but times were changing, the punk wave swept in and the band broke up playing their last gig in June 1977. Here’s the first ever vinyl reissue of their only album. 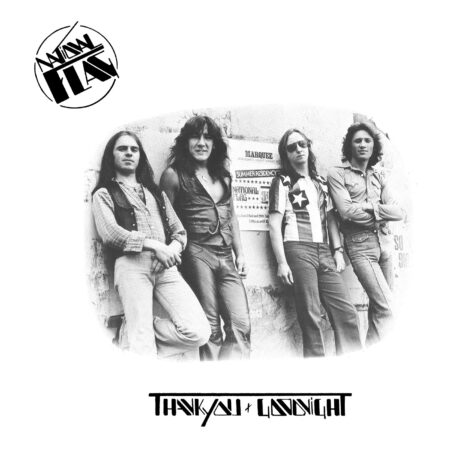