State of your mind

The Bitter Seeds were one of the pioneering bands from the early Monterey music scene. Leaded by flashing guitar player Leonard “Pooch” Paschini, they were active from 1966 to 1970, gigging regularly at such legendary venues as Bull’s Eye Tavern, Longshoreman’s Hall, Matrix, Fillmore, etc, sharing stage with famous bands like Grateful Dead, Jefferson Airplane, Iron Butterfly or Steppenwolf…
In 1967, The Bitter Seeds recorded their only 45, issued under The Rock Shop name, as they wanted to avoid confusion with The Seeds. “State of your mind” b/w “Is that your halo” was released on the Rowena label and it’s a brutal garage-psych double sider.

The following year the group recorded four studio tracks which have remained unreleased until now. These are perfect examples of the transition from R&B-garage to early psychedelic sounds which many San Francisco ballroom bands experienced at the time. An exciting find for any lover of lost West Coast psychedelic sounds.

For this Bitter Seeds / Rock Shop retrospective, we’ve also unearthed some wild live recordings from 1966 with good sound quality. And amazing document which had been buried until now.

“…”Is That Your Halo” is an intensely menacing punker that rumbles into Yardbirds’ rave-up territory at the bridge where incendiary leads battle with rasping harmonica; “State Of Your Mind” is an almost equally powerful acid-punker – truly a double-whammy of a 45…”-Fuzz, Acid & Flowers 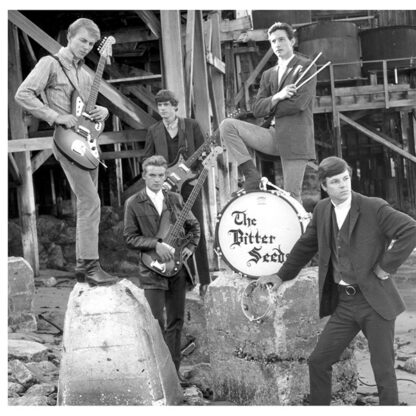