Munehiro Narita, the original “psychedelic speed freak”, is for many people the undisputed king of acid-fuzz guitar.

In active since the late 70s, Narita is a Japanese psychedelic underground legend. After playing in cult bands like Kyoaku no Intention, he founded the brutal heavy-psych power trio High Rise in the 80s. His furious guitar playing, which involves lethal doses of fuzz-wah at ear-splitting volume, can also be heard on his current band Green Flames (featuring Mitsuru Tabata from Acid Mothers Temple).

In 2014 Narita released a Japanese only CD titled “Psyche De Loid”, doing heavy guitar fuzzed-out covers of classic psych songs from the 60s/70s. But “Psyche De Loid” was also the first ever psychedelic album recorded using the Vocaloid technology. Very popular in Japan, Vocaloid is a software / singing synthesizer: you enter the lyrics of a song into the program, add music, and then you can have one of the Vocaloids – or “Vocal Androids”, mostly female – sing for you in a bizarre “android” type vocals.

Previously available as a Japanese only CD, here’s the first ever vinyl edition with new artwork.

“One of the finest acid-punk shredders to ever walk the planet, Munehiro Narita gives these time-honored psych rock classics a serious kick in the ass, in the most bizarre and Japanese of musical settings” – Steve Krakow (Galactic Zoo)

Side A: Fire – Venus – Summertime Blues – You Keep Me Hangin’ On – Move Over

Side B: Born To Be Wild – White Rabbit – Kick Out The Jams – Astronomy Domine – Little Doll 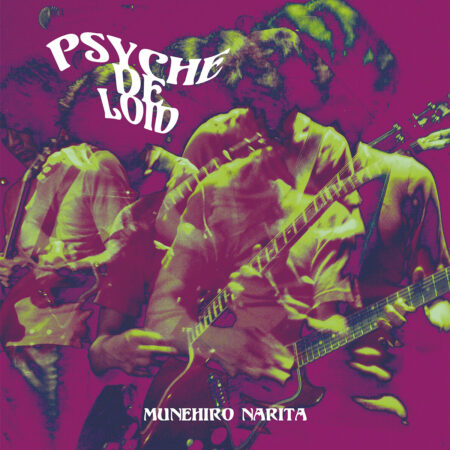