Spaced out bleeps & bloops and wild ARP synth freakouts from 1976!

A renowned audio producer and electronic composer, among other many things, you’ve probably have seen Tom Hamilton’s name in the credits of many albums by Robert Ashley and on releases from labels like Lovely Music, Pogus Productions, New World Records, etc.

Tom was first introduced to electronic music in 1965, while he was an undergraduate in Milwaukee, thanks to a lecture by Vladimir Ussachevsky illustrated with examples of electronic composers of the day: Bülent Arel, Karlheinz Stockhausen, Pierre Henry, Milton Babbitt…Encouraged by his teacher, Thom David Mason, Tom started to build audio circuits and battery-operated boxes that produced or modified sounds.

In 1969, Tom moved to St. Louis. After graduating at Washington University, he was offered a job to design, purchase, and build an electronic music and recording studio there. He now had continuing access to commercially built synthesizers and by the mid 1970s Tom found that working with electronic music was more satisfying to him than other musical endeavors.

The idea for the “Pieces for Kohn” album came from a studio visit with St. Louis artist Bill Kohn. Tom was an admirer of his work, which combined vibrant color combinations to fulfill 3-D geometric and architectural compositions in paintings, prints, and watercolors.
Bill proposed that Tom composed music for his art exhibition opening at a famous St. Louis gallery and Tom decided to simultaneously release that work on LP. Tom picked four of the paintings that he liked the most and titled his four pieces correspondingly. The recording took place at the Washington University Electronic Music / Recording Studio – the studio that Tom designed and first built in 1971 and then moved and rebuilt in 1974 (where it resides to date).

The original tapes were performed at the opening of Bill Kohn’s exhibit at the Terry Moore Gallery in St. Louis, in January, 1976 and then Tom did a limited pressing of the album on his own label, Somnath Records.

*First ever vinyl LP reissue of this cult electronic album 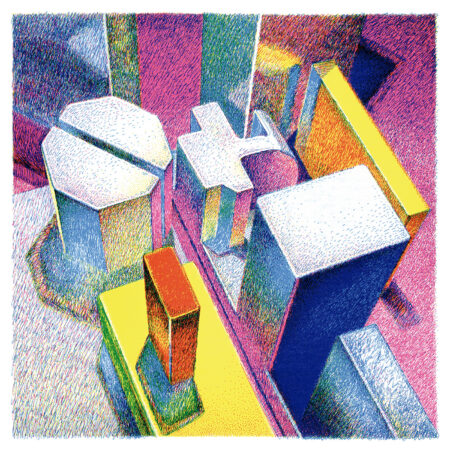