Born in 1942 in Rio de Janeiro, Jorge Antunes is one of the earliest composers of electro-acoustic music in Brazil. During the early 60s, he built his own components for making electronic music: theremin, sawtooth oscillator, a spring-reverb device, a frequency filter… The works included on “Música Eletrônica” were recorded at Antunes’ home studio and at the Electronic Music Laboratory of the Institute Torcuato Di Tella, in Buenos Aires, Argentine.

We can find early pieces like “Valsa Sideral” (1962), on which Antunes uses artificial echo and reverberation by feedback between the recording heads to create the first Brazilian work consisting only of electronic tones.

“Auto-retrato sobre paisaje porteño” (1969 / 1970) is an amazing piece of early turntablism on which Antunes “samples” an old tango vinyl record found at a flea market, using it as a loop and for sound effects / manipulation, adding a different, “electronic dance” version to it, mixed with electronic sound effects and cut voice manipulation / sound poetry. It sounds years ahead of its time and it’s a precursor to the dance / downtempo music from the following decades. The version included here, features the audio collage which Antunes created to criticize the military regimes from Brazil and Argentine and which wasn’t used on the original LP to avoid any problems with censorship.

“Historia de un Pueblo por Nacer or Carta Abierta a Vassili Vassilikos y a todos los Pesimistas” (1970) with its sinoidal sounds and low frequencies was inspired by the plot of the novel and film ‘Z’ by Vassili Vassilikos. In the original audio of this work, Antunes used a quotation from the International Communist anthem. To avoid problems, he cut that passage for inclusion on the original LP. But you’ll find here the uncensored, original version.

In 1970 Antunes had done research at the Institute of Sonology at the University of Utrecht with a specialization in Computer Music (working with the Electrologia X-8 computer). During the 70s at different occasions he had worked under guidance of Pierre Schaeffer and Iannis Xenakis amongst others.

First ever vinyl reissue with uncensored titles / music, just as Jorge Antunes envisioned it at the time

Insert with liner notes and photos

“…It’s a minute or so into “Auto Retrato” when a very contemporary mix of archival sound and downtempo beat kick in; DJ Kid Koala wasn’t even born when this was recorded…” – Marc Weidenbaum (Disquiet) 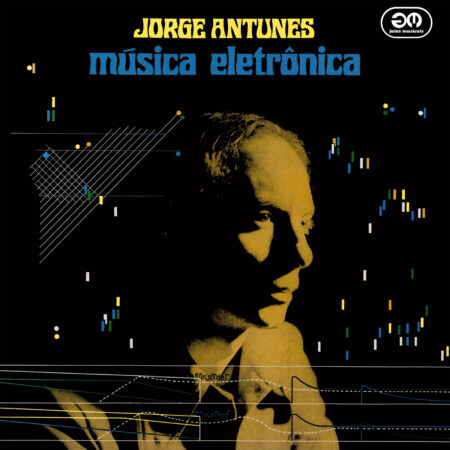