For the first time, Portuguese prog folk outfit Banda do Casaco’s third album is finally available in CD. Acclaimed in 1977 as best record of the year in its own country, “Hoje Há Conquilhas Amanhã Sabemos” has long been unavailable in any format. In more recent years, worldwide acclaim has been recognised to this masterpiece, which resulted in the original vinyl version changing hands for high values.
Banda do Casaco was originally formed in 1973 by musicians from various musical areas, and the group always maintained a changing line-up. However, four names have played an essential role in their history: Nuno Rodrigues (ex-member of Música Novarum and Family Fair, composer and today a label manager), António Avelar Pinho (lyricist, who had previously written for Portuguese psychedelic group Filarmónica Fraude and nowadays an author of children’s books), Celso de Carvalho (classically trained cellist, also a member of avant-garde group Plexus, who died in 1998) and José Fortes (sound engineer, one of the best in Portugal in those times and still today). All of these names were present in this record, apart from a full hand of other musicians.
Originally released in 1977, one year after Banda do Casaco’s second LP, “Coisas do Arco da Velha”, this record marked the debut within the group of guitar player and flutist Tó Pinheiro da Silva (then-member of prog rock group Perspectiva). Violin player Mena Amaro, nowadays a classical singer, came from the previous line-up, but all the other members were new: Miguel Coelho (violin), Carlos Barretto (a famous jazz bassist) and Jorge Paganini, who completed the trio of violin players in this record.
Basing part of their repertoire in the traditional folk songs of Portugal, Banda do Casaco presents here one of their best works in reinventing this rich legacy. The subversion of the canons of what we normally know as folk song reaches surrealistic edges in tracks like “Geringonça” or “Despique”. In other ones, like the great “País: Portugal”, there are acute musical and lyrical portraits of Portugal and its capital city Lisbon (as the lyrics state, “giant and poor-thinking head that is born between the legs of river Tagus”), as both entities keep drowned in their colective ghosts and fear to free themselves from this state of apathy.
The complex sounds constructed here place Banda do Casaco among the best folk rock made internationally in 1977 – Steeleye Span’s “Storm Force 10”, Jethro Tull’s “Songs From the Wood”, Gryphon’s “Treason” or Brittany’s cherished treasures like Malicorne’s homonymous fourth album and Alan Stivell’s “Before Landing”.
Pioneers in Portugal in many aspects (no Portuguese group up to then and very few since managed to publish seven studio albums in a discographic career of 10 years), Banda do Casaco always knew how to reinvent themselves, never giving what the public seemed to demand and driving their career on the outskirts of the political intervention that led Portugal on the years after the 25th April revolution. However, this never prevented them from satirising and criticising all sceneries they wished to. But what matters is that “Hoje Há Conquilhas Amanhã Não Sabemos” is finally available in CD, for all to enjoy! 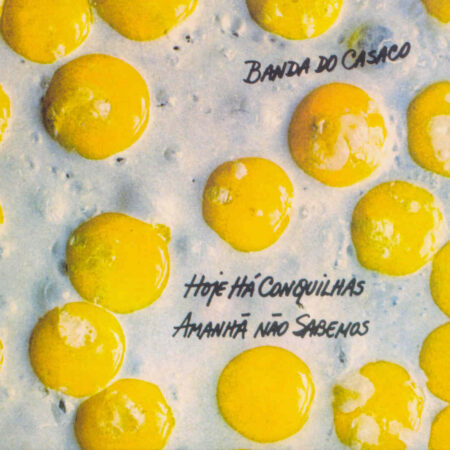