Short-lived British folk-rock band Heron was formed in the suburban town of Maidenhead, Berkshire, in 1967, when guitarist/pianist Roy Apps and singer Tony Pook began playing with guitarist Robert Collins, inspired by the music of Bob Dylan and The Incredible String Band. Collins soon quit the group, yet Heron solidified into a noteworthy entity upon the entry of the broadminded and perceptive guitarist and mandolin player Gerald T. Moore, a veteran of R&B bands in nearby Reading, who brought a higher level a musical dexterity, song-writing ability and arrangements; guitarist Martin Hayward was another early member that did not remain with the group for long. Once accordionist/keyboardist Steve Jones was in the fold, things leapt forward through Apps’ role as Student Entertainments Secretary at the Reading College of Technology, which allowed the group to open for Ralph McTell and other established performers. Signed as songwriters to Essex Music, they were spotted by Donovan’s producer, Peter Eden, who signed them to Dawn Records, an alternative subsidiary of industry giant, Pye. Their self-titled debut album, produced by Eden, was recorded in the open air at a Pook’s family farm in rural Appleton-On-Thames. For the rare 12-inch single “Bye And Bye,” the title track was a wistful wish for the romance of travel, written by Moore, followed by his heart-broken “Through And Through”; Moore’s unusual reading of Bob Dylan’s “Only A Hobo” sparked considerable media interest and Pook’s “I’m Ready To Leave” was a contemplative closer, again tinged with melancholy. “Bye And Bye” received considerable airplay, but a vinyl delivery strike ultimately curtailed demand. As expanded Heron went on to record sophomore set Twice As Nice & Half The Price, before Moore quit the group to back his Persian girlfriend, Shusha; he subsequently founded the world’s first white reggae act, GT Moore and the Reggae Guitars. 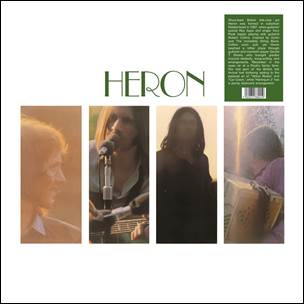