Joan Reggae Drummer, based in the region of Catalonia in Spain, is a great lover of Jamaican music, at a very young age he began to be so passionate about drums that he created his first musical projects, among them, the band that was a turning point was The Pepper Pots. With 6 albums already released and several tours in Europe, UK, Japan, USA & Czech Republic , Joan has opened for internationally artists such as Jimmy Cliff, Kymani Marley, Laurel Aitken, Derrick Morgan, Ticken Jahfakoli or The Pioneers among others. He performed at major festivals such as Summerjam Reggae Festival (Germany), Rototom Sunsplash (Italy), Primavera Sound (BCN), Rock For People (Czech Republic) or SXSW (Austin, USA).

Joan as a drummer has also worked with a lot of top international soul artists such as Curtis Mayfield’s legendary band The Impressions, Eli “Paperboy” Reed, Maxine Brown, Binky Griptite from Daptone Records that has been in bands such as Antibalas, Sharon Jones & The Dap-Kings, The Dap-Kings or The Mellomatics.

In 2020, after a time of musical hiatus due to the Covid, he began his more personal adventure, creating his own channel dedicated solely and exclusively to the world of drums in Reggae and Dub. Currently his Instagram channel has more than 34.000 followers and the content published has so much repercussion.

First this major collaboration last year with Aston Barrett Jr for a special tribute to his uncle , Carlton Barrett (Bob Marley), one of Joan’s favorite drummer. And at last all this work led him to record his first debut EP “DUB Explosion” on the label Two Flames Records, a real explosion of DUB, where the common thread of the songs are drums.

JRD “DUB Explosion” is a performance in the form of an EP, consisting of 4 instrumental Dub tracks with a totally different concept than what we are used to, since the songs were created from the drum beats.

Finally, the production, mixing and dub was done by the musician and producer Ireneu Grosset, in the analogue studio of Dr. Dubwiser. It was quite an experience as the studio has a team very similar to what Jamaican producers had in the golden age of Reggae in the 70’s. 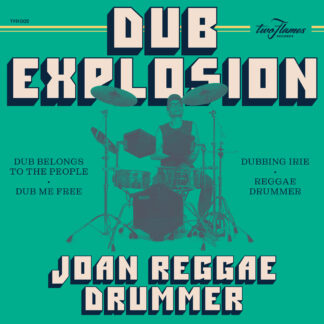