Featuring all-time acid-punk classics such as “It’s Her” and “Walkout Of My Mind”.

Cykle was formed in 1968, North Carolina, when gifted musician and songwriter Jimmy Sossamon (previously in famous local band The Young Ones) heard a local group, the Glory Cykle. He was so impressed that he approached them about becoming their manager. The band — guitarists Ralph Stevens and Jeff Hardin, bassist Grady Pope, organist Rick Wilson, and drummer/vocalist Ken Allen — practiced at the studio Sossamon had built in his parent’s garage, and by the end of the year, Sossamon took up the drummer’s seat to free up Allen as lead vocalist.

Band’s name was shortened to Cykle and in early 1969 they began recording an album consisting entirely of Sossamon originals. The resultant eponymous LP was released later that year as a private pressing of 500 copies on the band’s own Label Records. But despite the 1969 release date, “Cykle” sounds straight from the 1966-67 garage-punk-psychedelic book.

LP housed in an old- school- style tip- on sleeve.

“When the most popular garage bands of the day were moving further and further away from the genre’s “less is more” production ideal, Cykle offered a raw, authentic take on what garage rock was meant to sound like.” – Psychedelized 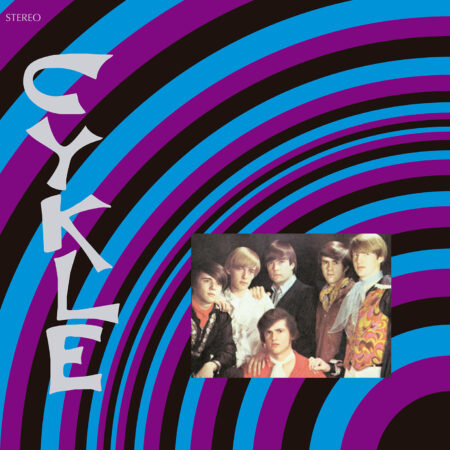