This is the first official re-release on vinyl under licensed courtesy of BMG Rights Management, UK, remastered from an original master copy out of the vaults of BMG. Originally released in 1969 on Pye Records. To check out Blonde on Blonde’s ‘Contrasts’ album, light a joss stick and prepare to take a psychedelic trip back in time to those incense and peppermint flower-power days of the glorious late 1960s. The album starts with the dramatic introduction ‘Ride With Captain Max’ that sounds like something that was left out of the sessions of the Rolling Stones ‘Their Satanic Majesties Request’ with a pounding percussion roar, sneering guitars, and a thundering bass line that makes it perfect for a roller-coaster ride before going into a calm folk-like lyrics that is yet a breathtaking experience. This song is a veritable potpourri of acid-drenched guitar leads, gloriously combined with gentle acoustic guitar passages. Next, we have the early beginnings of raga-rock with sitar and flute on the groove with ‘Spinning Wheel’. This guitar and sitar song sounds very Indian featuring a simply stunning sitar solo that radiates 1960s flower-power like a bright ray of sunshine. ‘No Sleep Blues’ is an entertaining interpretation of the Incredible String Band song, full of angelic slide guitar, tempo change, and such a connection with the original spirit of the piece, that if the ICB had ever rocked up, this is probably what they would have sounded like. ‘Goodbye’ is a bittersweet ballad with a lovely 1960s melody with a baroque pop sound. The garage rocker ‘I Need My Friend’ has a great pounding piano work, fuzz tone guitar sounds, another wild psychedelic excursion along the hippie trail. The doomy and explosive ‘Mother Earth’ is a sophisticated dramatic composition, still in a heavy blues rock vein, but with a more progressive atmosphere. Bonus track ‘Country Life’, the flipside of the first 7″, a wonderful psych-pop song, closes side one. Side B starts with a very accomplished version of the Beatles’ classic ‘Eleanor Rigby’, given the Blonde on Blonde jangling guitar treatment with an almost unrecognisable introduction, and replaces the string quartet with an insistent acoustic and gentle percussion – and a trumpet. ‘Conversationally Making The Grade’ is another rip-roaring sonic boom of keyboard prog with some wild psychedelic guitar riffing thrown in too. This music is a blast! ‘Regency’ is a short instrumental piece that goes into the classical sound of the 15th century with harpsichord and Spanish guitar fingerpicking techniques before seguing into the Renaissance folk beauty on ‘Island On An Island’, a lovely nautical-sounding folk song that dances merrily along on a wave of flutes, acoustic guitars and gorgeous multi-part harmonies. There’s a beautiful ballad on the way with ‘Don’t Be Too Long’, which is a complete contrast to the heavier psychedelic numbers on side one, and it’s a welcome diversion too, featuring a vibrant acoustic guitar and with the singer in appealingly fine voice. This is probably one of the best 1960s pop songs that no one’s ever heard of. The original album ended with the beautiful ‘Jeanette Isabella’, a gloriously uplifting piece of music, featuring scintillating sitars and acid-soaked electric guitars. On this reissue we have another bonus track with ‘All Day All Night’, the A-side of a 1968 single, heavy in sitar, recalling the Beatles’ early use of the instrument, like a hi-energy ‘Within You Without You’. This album is an authentic representation of what was being called progressive rock in 1969, before the release of King Crimson’s debut, although not really what we’d think of as prog rock now. The quality lies in how the several genres (folk, blues, psych and rock) are fused together with a fresh energy, that successfully heralds in, and provides a missing link from psychedelic rock to progressive rock that was about to explode on an unprepared world. This rare album is a must have for anyone who wants to get into the deeper realms of the underground-era. The album comes with exact reproduction of original cover sleeve, additional cover-sized insert with bandstory and photos. A highlight! Highly recommended! 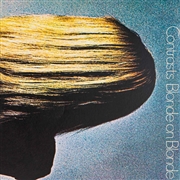