“Cologne Curiosities” collects, for the first time on vinyl, all the otherwise unpublished/un-reissued material that firstly appeared on the three “Unknown Deutschland – The Krautrock Archive” CDs released on Virgin during 1996. These CD only releases were originally compiled by Trevor Manwaring (Paratactile, Impetus, Virgin, Harmonia Mundi) from tapes supplied to him by Toby Robinson. Toby – aka The Mad Twiddler, aka Genius P. Orridge – is well-known to Krautrock collectors as one of a number of engineers working at Stockhausen’s WDR and Dierks Studio in Cologne in the mid-1970’s, where he assisted on recordings by many famous Kraut bands such as Can, Birth Control, Mythos or Dzyan.

The recordings included here were made between 1972 and 1976 using studios in and around Cologne, produced by Toby Robinson for his own amusement, just having fun on the studio. Bands would come in for practice sessions, to record demo’s, and during slack periods impromptu jams would happen. Most of these sessions were recorded by Toby, and they feature Toby himself plus a revolving cast of friends and musicians (some of them apparently big Kraut names under pseudonym).

It was during that time in Cologne, that Toby, along with Fluxus artist Robin Page, gave birth to the mysterious and controversial Pyramid label, for which these tracks were originally made for.

Insert with detailed liner notes by Alan Freeman (Ultima Thule, The Crack In The Cosmic Egg)

“…Although memories from that time are beyond repair in many cases, the tapes remain to bear witness to this creative and anarchic scene…” – Trevor Manwaring 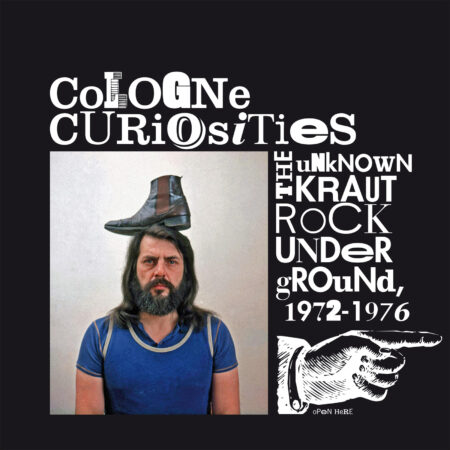 You're viewing: Cologne Curiosities: The Unknown Krautrock… 25,00 €
Add to cart