Top notch jazz-rock-fusion with funk and Latin touches from Catalonia, 1975.

“After recording in 1972 the cult album “We Are Digging The Beatles” with ex-Màquina! sax player Peter Rohr, innovative pianist Lucky Guri decided to form his own band, having jazz as a starting point but taking it to a more electric, eclectic sound with multiple influences. And thus, in 1973, he created the New Jazz Trio, which would become the embryo for Barcelona Traction. Lucky was accompanied by top double bass player Jordi Clua (ex-Dos +Un) and drummer Francis Rabassa (a veteran of the Barcelona 60s beat scene). The New Jazz Trio was the house band at the legendary La Cova del Drac jazz club, where they played every day, even acting as the backing band for international artists that came mainly through the USA-Paris jazz connection.

Performing life on a daily basis gave the trio great skills and the confidence to create a more personal sound through improvisation. But the turning point came when they decided to go electric. Lucky Guri moved to electric piano and even introduced the mini-moog to their sound. Jordi Clua never left the double bass, but started to use an electric bass as well. Add the modern, daring beat of Francis Rabassa and they started delivering a totally electric jazz-rock sound. The resulting mix arose the criticism of their more jazz-purist followers who turned their back on them, but the younger generations and a new audience coming from rock started to follow them instead.

After changing their name to Barcelona Traction, they caught the attention of popular catalan singer-songwriter Joan Manuel Serrat, who arranged for them to sign for his label, Òliba-Edigsa. The resulting LP contains five instrumental tracks. Three are written by Lucky Guri, the other two are fabulous covers of Rubens Serrano’s “Sudamérica” and James Taylor’s “Fire and Rain”, here translated to Catalan as “Foc i pluja”.

On Francesc Bellmunt’s film about the famous Canet Rock festival, the band appears playing “Sudamérica”. Thanks to this footage we can see how powerful the trio was on stage. Barcelona Traction marked an era, and their eponymous debut LP is here to prove it. Modern, fresh music that gets the attention of the listener. Unlike other bands like Música Urbana, more based in sophistication and more technical developments, Barcelona Traction is a combo that stands out due to the apparent simplicity and high energy of their sound, with the quality of being able to appeal and be listened in any situation, taking it beyond strict, pigeonholed mind sets.”
– Álex Gómez-Font 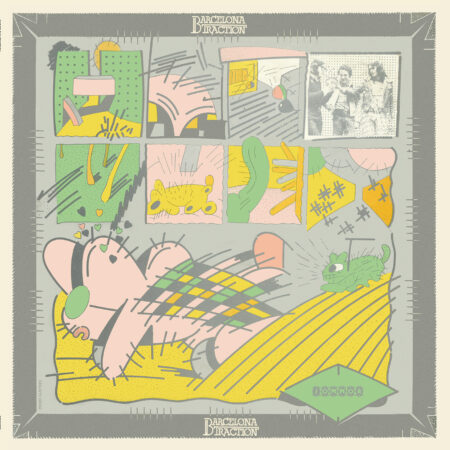