Powerful and melodic hard-rock by this US power-trio: ultra-loud Quilter amps, killer leads, fuzz bass, furious drumming and vocals. Recorded at the legendary Sonobeat Studios in Austin (home of Mariani!) and originally released in 1971 as a private demo album, now impossible to find.

Originally formed in California in the late 60s, Wildfire consisted of Randy Love (guitar/vocals), Danny Jamison (bass/lead vocals) and Donny Martin (drums).
Famous for powerful live shows, they packed the clubs with lines around the block of fans waiting to enter, becoming the house band for Finnegan’s Rainbow and the favorite group of The Hessians Motorcycle Club, who became the unofficial guardians of the band. Soon, they got in touch with Pat Quilter from Quilter amps. Tired of blowing up amps when playing, Randy told Pat to design an amp that couldn’t blow up. And he did it. Following Wildfire’s input, Pat designed for the band the famous “Master Volume Dial” amp.

In 1969, a Texas promoter heard the band in Southern California and brought them to Austin, becoming an instant hit locally in the Austin area. While in Texas, Wildfire shared the stage with Freddie King, the Allman Brothers, Johnny Winter and ZZ Top. It was in Austin that the 8-song demo was cut at Sonobeat Records (home also of Mariani and Cold Sun), released in 1970 as a private pressing housed in a plain white cover with a Wildfire sticker, each one numbered. The demo album was never sold other than at a small record store in Southern California and it’s now one the rarest hard-rock albums from the US. First bootlegged in the 90s and then officially reissued by Shadoks in 2006, here’s a welcomed new vinyl edition. 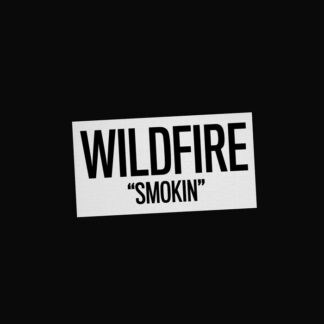 You're viewing: Smokin’
Add to cart