a Japanese blog entry from 2018:
“In 1978, young Alan Ogletree entered the Louisiana State University as a student, and started a rock band called Sojourner. Their music was characterized by keyboards, coupled with excellent guitar playing. The music shows excellent avant-garde rock, folk rock, hard rock and pop rock styles, and the lyrics are deeply oriented in Christianity.
The next year, they recorded at their own expense the “Wings Like An Eagle” album, 500 copies. In addition to giving copies to their relatives and friends, the album were sold at the band’s performances. This self-funded album has not been republished by a record company so far, so it is relatively rare. The current second-hand price is about 150 euros.”

This basic data is corroborated by Ogletree’s brother’s blog:
“Wings Like an Eagle. Where did I come up with this name for my blog? Logical question. The obvious answer is Isaiah 40:31: But those who hope in the Lord, will renew their strength. They will soar on wings like eagles; they will run and not grow weary; they will walk and not be faint. But there’s another reason. When my brother Alan was at LSU (1978-1983), he was in a band. I thought that was so cool! They even cut an album. Even cooler! The band’s name was Sojourner and the album title was Wings Like an Eagle. I still remember sitting in the gym at our old church in New Orleans watching them play. I was so proud!” 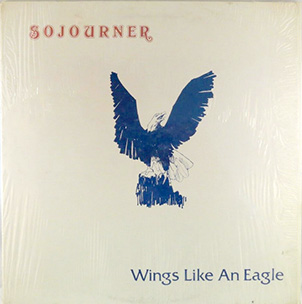