First ever vinyl reissue with original artwork of this US private pressing from 1976.
Progressive hard-rock with psychedelic touches, melodic vocals, top level musicianship and stunning lead guitar all over.

Originally from Benton Harbor, Michigan, White Summer was formed in 1973 by a trio of eighteen-year-olds who shared a mutual love for Hendrix, Cream and Grand Funk among others. They were: Jim Watkins (drums and vocals), Rick Lowe (guitar and vocals) and David Wheeler (bass). White Summer played many shows at high school dances, outdoor festivals and nightclubs, becoming in the following years one of the top rock acts not only in Michigan but also in Florida, where they relocated at the end of the 70s.

White Summer’s first album, known as the “White Album” due to its simple design, was recorded at Uncle Dirty’s Sound Machine Studio in Kalamazoo, Michigan, by Bryce Roberson who had formerly been an engineer at Chess Records. Self-financed by the band, 1000 copies were pressed and sold in the Michigan area.

Sought-after by collectors worldwide, this is the first ever reissue featuring original artwork.

“This is the best band I have ever seen in a bar!” – Eric Clapton

“This is the longest I ever sat and listened to a band.” – Neil Young 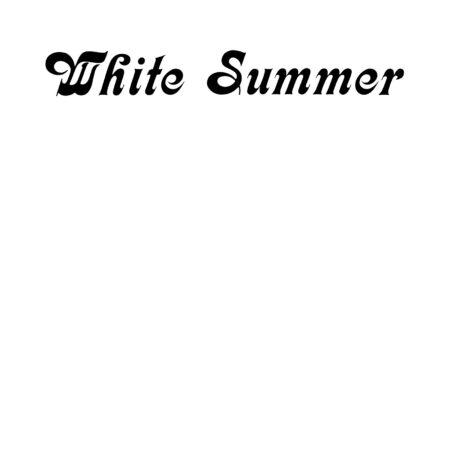