We Have Waited: Singles And Unreleased

Call SEOMPI proto-doom, call them heavy progressive/psych, call them hard rock, call them psychedelic space rock — all are true — but definitely call SEOMPI radical in their approach to heavy music — and heavy topics (police, drugs, social justice, prejudice, war). SEOMPI (Self Expression on Musically Potential Instruments) released only three singles during their time together c. 1971, but what singles! Three posthumous releases have only added to SEOMPI’s aura — even though two of those were at the wrong speed + said they featured single mixes (and didn’t); and the third of those — on Rockadelic — is long out of print.

For this collection, we have gathered all of SEOMPI’s actual single A and B sides, including their incredibly rare first single, ‘We Have Waited’ b/w a guitar-less take of ‘Lay On the Floor’, a song they re-recorded for their third single. The second side of the LP is comprised of previously unreleased takes from the band’s recording sessions. A swath of tracks from these SEOMPI sessions were released on the Cicadelic Records “Guns From the Skies” CD collection — but not any of these takes.

The year was 1970, and Dave Williams was done with his stint at one of Texas’s finest barbed wire facilities — the same path that had landed Roky Erickson at Rusk Stale Hospital had put Dave behind bars. Five years earlier, Dave was a founding member of the Headstones, McAllen Texas’s answer to teen angst rock music. Not content with being the usual ‘cover’ band, Dave began to write original tunes and worked long and hard in rehearsal sessions to perfect them. After releasing legendary singles on the Pharaoh label and being courted by numerous major labels, the Headstones called it quits in 1968. Always an innovator, Dave formed SEOMPI, first as a three piece guitar-less two bass and drums band, and then adding blazing guitar.

SEOMPI takes you on a trip back to 1971, when Texas was a stomping ground for epochal rock music, proving with each track that they could, and in some cases actually did hang, with other legendary psych and rock heavies such as The 13th Floor Elevators, The Zakary Thaks, ZZ Top, and Johnny Winter. 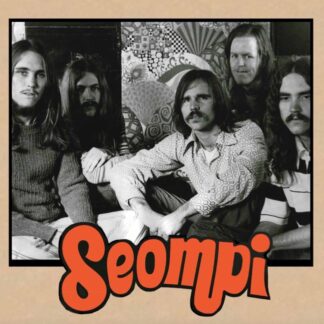 You're viewing: We Have Waited: Singles And Unreleased 36,00 €
Add to cart