WE THE PEOPLE / AMERICAN ZOO

We present the amazing story of We The People, a 60s teen band from L.A (not to be confused with the other band with the same name from Florida) who created an amazing blend of garage, folk-rock & psychedelic sounds. Between 1967 and 1968, the band, comprised of four young kids, recorded a few 45s for the Reena label, two of them released under the American Zoo name.

Despite their young age, the band members were accomplished musicians / songwriters. They debuted in 1967 with “Feelings of my emptiness” / “For no one to see”, two amazing pieces of moody garage with superb vocal harmonies and arrangements.

Their second 45, “Back Street Thoughts” / “Who Am I?” offered two pieces of introspective psychedelia with some over the top tape/echo effects courtesy of Dal Kacher, a session guitar player and sound engineer who had been part of early Mothers Of Invention. “Who Am I?” was included decades later in “Diminishing Returns”, a famous psych mix by DJ Shadow.

In 1968, the group released their third 45, this time under the American Zoo name: “Mr. Brotherhood” / “Magdalena” were another two examples of outstanding garage-psychedelia. A second pressing of the 45 was released featuring a new mix of “Mr. Brotherhood” losing one minute but incorporating some wild electronic effects. In the 1980’s, the song was included on such legendary compilations as “High All The Time” and “Psychedelic Unknowns”.

That same year, American Zoo released their last 45: “What Am I?” was a reworking of “Who Am I?” with a more psychedelic production by Del Kacher. It was backed with the earlier recording of “Back Street Thoughts.

So, the story of four young kids playing and recording top-notch garage-psychedelia is in itself amazing…but even more amazing is what happened later to some of the We The People / American Zoo members: Guitar player Bill Bottrell became a Grammy award producer, working with Michael Jackson, Madonna and George Harrison among others. Drummer Jason “Jasun” Martz toured with Frank Zappa and recorded with Michael Jackson. Today, he’s a well-known avant-garde artist and sculptor. Steve Zaillian, the first We The People drummer, became an Academy Award winning director, producer and screenwriter (“Schindler’s List” and “Hannibal” among others).

This collection includes all the We The People / American Zoo 45 sides plus two previously unreleased tracks from 1967, taken from the only surviving copy of the band’s 10″ demo acetate.

“…Until now, the earliest musical output of the We The People / American Zoo members was a well-kept secret, known only to a few collectors and connoisseurs of obscure records. This collection brings together all their recordings for the very first time and it is fascinating to hear the budding talents of these incredibly creative teens bloom and burst into flower.” – Gray Newell (Shindig! / Ugly things)

“…The album clocks in at less than 30 minutes, but when every one of those minutes is pure magic, how could you possibly complain? We have a new contender for album of the year” – Mike Stax (Ugly Things) 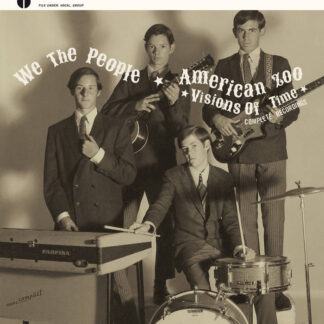 You're viewing: Visions of time
Add to cart