As early as her first album, Retiens mon désir (2016), Cléa Vincent brought us her fresh new pop sound, and succeeded in speaking a universal language through her music – an achievement that she accomplished again in Nuits sans sommeil (2019). Tropi-Cléa 3, which concludes the trilogy with a tropical excursion begun in 2017, represents a new – and bright – demonstration of this.
A souvenir record from her tour in Central America, it draws its inspiration from latin music, from the jazz that makes up Cléa’s roots. Surrounded by her live musicians who participated this time with her in the songwriting, she plunges us into into an exotica à la française, in the legacy of the French Riviera of the sixties, where Cléa’s admiration for Nougaro, Sébastien Tellier, le Gotan Project, Baden Powell, Tito Puente, and Gilberto Gil shines through. As though in mockery of the quarantine, Tropi-Cléa 3 opens a door for us to a festive and salvational escape. 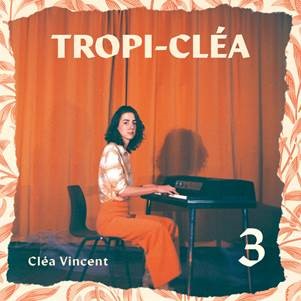