Crystalaugur was formed by four young ex-pats attending school in Singapore in the early 70s: Howard Kukla, Kim Bengs, Bryan Hall and Guy Rittger. For most of them this was their first serious musical experience. “Terranaut” was recorded on a 4-track machine and subsequently released by the band in a private edition of 200 copies on their own Warped Records imprint. Bootlegged many times over the years, we present the first ever legit reissue of this “lost-in-time” psychedelic artefact.

*First ever legit reissue done with the band’s involvement.

*Insert with rare photos and detailed liner notes by Jeremy Cargill (Got Kinda Lost, Ugly Things), explaining the fascinating story behind Crystalaugur and debunking many myths and false rumours about the band and their only album.

*LP housed in an old- school- style tip- on sleeve.

“…Terranaut is a rollicking, rumbling and lightly ramshackle bomb of cosmic teenage hard rock informed by an infatuation with the early rumblings of progressive rock (given a proto-punk edge by the discontent of the group’s constituents).” – Jeremy Cargill 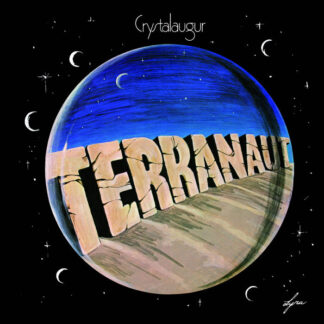 You're viewing: Terranaut
Add to cart