Sourced from the original master tapes.

Part-time farmer / musician Oliver Chaplin is the person behind one of the rarest private pressings from the UK.

His cult masterpiece “Standing Stone” was recorded in early 1974 at a remote farm in Wales, using a portable 4-track Teac reel-to-reel machine. Helped by his brother Chris at the controls (an experienced BBC engineer who had worked on Syd Barrett sessions), surrounded by animals and “smaller winged creatures”, Oliver sang and played acoustic and electric guitars filtered though tape echo, distortion and multi-tracking, creating a very unique sound, a kind of DIY mutant-psychedelic-blues (think Captain Beefheart) which sounded years ahead of its time. Despite the lo-fi nature of the recording, the sound quality is amazing and timeless.

Only 250 copies of the album were pressed and it even caught the attention of the Virgin label, who were interested in distribution but Oliver finally refused their offer. Musicians like JJ Cale expressed interest in Oliver’s music, inviting him to a jam session but in the end, Oliver decided he was not interested in the music business and left Wales to travel around Europe.

He remains a kind of a mysterious figure and we’re proud to offer a new, long-awaited reissue of “Standing Stone”, sanctioned by him.

“Few other musicians have been able to mix and blend folk, blues, psychedelia together as Oliver has managed to do”- Ricardo Martillos (Distorsioni)

“Like a rustic, ramshackle mix between Electric Ladyland and No Pussyfooting” – Giacomo Checcucci (Pincopanco) 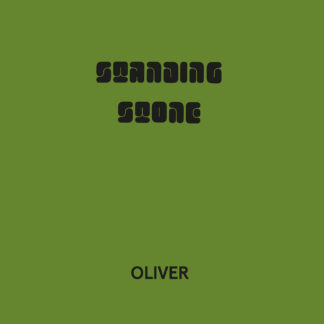