First ever reissue of this classic recording
12 page booklet

Dharma as they were simply known, at the time when they were still playing, englobed all the incarnations of the group, trio, quartet (essentially as a live band) and quintet built around the stable core of pianist and bassist Patricio Villarroel and Michel Gladieux. Snoopy’s Time is their second album, concentrated on the rhythm section including the ever-faithful Jacques Mahieux on drums, and recorded three months after Mr Robinson, the first album, made as a quintet including Jef Sicard and Gérard Coppéré, both at the time saxophonists with Claude Delcloo’s Full Moon Ensemble. It is the most classic album in their discography, marked by the influence on Patricio Villarroel of the electric explorations of Miles Davis’ pianists from 1968, that is to say Herbie Hancock, Chick Corea, Joe Zawinul and Keith Jarrett. Indeed, the use of echo, reverb and saturation by Patricio Villarroel is similar to that of his famous counterparts. It would be a year later in France, but with a sound all his own, that Siegfried Kessler. 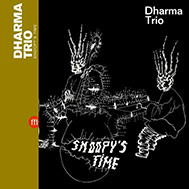