This is precisely the concept behind “Series Vol. 1 – Madlib”, the latest release on Mad About Records. The idea comes from the Portuguese drummer Frederico Ferreira, in short: FRED. Together with Eduardo Cardinho on vibraphone, Márcio Augusto on bass, Karlos Rotsen on piano, and Tomás Marques on saxophone, he takes what Madlib made from sampling Jazz music. He transfers the material into new Jazz music. It’s so ambitious that Madlib himself didn’t hesitate to give the project his blessing.

“I’ve always followed Madlib’s work, and the fact he has such a vast repertoire allowed me and the band to choose the songs that made more sense to be played with this particular line-up,” says Fred Ferreira. For example, the band chose “Keeper Of My Soul,” which can be found on the 2001 album “Angles Without Edges” by Yesterday’s New Quintet. On it, Madlib took a melody piece of the original by Walter Bishop Jr from 1973, looped it, and underlaid it with a forward-marching groove. FRED samples the groove and treats the original’s melody more as an ornament that freely lays itself around the beat. In this way, they take their cue from Madlib’s works of the last 20 years. The result is ten tunes of finest jazz.

Fred Ferreira himself looks back on a diverse repertoire of styles that the 40-year-old drummer from Lisbon has served throughout his life: kuduro with Buraka Som Sistema, hip-hop, and funk with Orelha Negra, punk and hardcore with Os Dias De Raiva. Fred also comes from a musical family. His father is Carlos Eduardo Ferreira, a drummer best known as Kalú.

The music will also be performed live, with José Garcia on bass and Diogo Santos on keys. “The live shows have been exciting, and our audience makes us want to do new things shortly.” We can look forward to that. 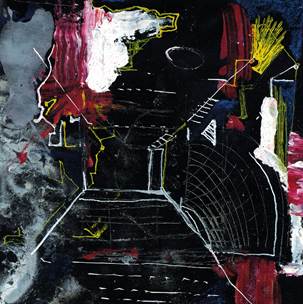