Psychedelic Percussion definitely sticks to his title. With the help from Paul Beaver of Beaver & Krause (famous keyboard wizard and sound engineer for the likes of Stevie Wonder), vibe master Emil Richards (check is two fantastic album on Impulse! with The Microtonal Blues Band featuring Joe Porcaro, father of the famed Toto brothers) and Gary Coleman (percussionist in the famous Wrecking Crew), Blaine goes wild in the studio with drums, gong, xylophone, organ, bongos, congas and timpani. Unusual textures and tones lead the way to 12 instrumental exotic numbers similar in a way to Raymond Scott most visionary experiments. This is pure madness, a record full of breaks and still unsurpassed in many ways. Blaine was an American drummer and session musician, estimated to be among the most recorded studio drummers in the history of the music industry, claiming over 35,000 sessions and 6,000 singles. His drumming is featured on 150 US top 10 hits, 40 of which went to number one, as well as many film and television soundtracks. He became one of the regular players in Phil Spector’s de facto house band, which Blaine nicknamed “the Wrecking Crew”. Some of the records Blaine played on include the Ronettes’ single “Be My Baby” (1963), which contained a drum beat that became widely imitated, as well as works by popular artists such as Frank Sinatra, Elvis Presley, the Beach Boys, Simon & Garfunkel, the Carpenters, Neil Diamond and the Byrds. 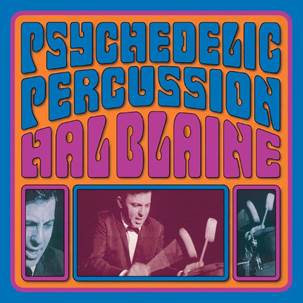