Proyecto A + Proyecto B

Proyecto A was the brainchild of the great Frank Dubé from Barcelona. What can we say about him? A truly fascinating character: a pioneer of rock & roll and twist in Spain during the late 50s and early 60s, an accomplished accordion player, a showman, comedian, a Psychoaesthetics master…But he should also be considered as one of the first psychedelic pioneers in Spain due to his groundbreaking work on the Proyecto A album.

Frank started working on Proyecto A in 1969. Impressed by the moon landing, he wanted to create a concept album about the Solar System planets using tone scales and groove music so people could dance to it at clubs. He recruited some of the best studio musicians around and the result was delirious concept album fuelled by fuzz-wah guitars, powerful, crazy vocals, electronic & bizarre effects, Hammond organ, soulish horns, funky drums…

Due to the limitations of recording studios in Spain at the time, Frank had to create his own effects and sound effects for the album. He used a primitive Binson Echo unit, he recorded vocals through guitar amps, he used guitar effects on the keyboards, recorded with a portable microphone the sound of the beach, waves and TV sounds…

Proyecto A was released in 1971 housed in an amazing gatefold sleeve depicting all the musicians wearing strange & bizarre psychedelic outfits. The project was shrouded in mystery (Frank used pseudonyms for all the musicians involved) and for many years the Proyecto A album has been plagued with many false rumors and stories. We set the record straight with this, the first ever reissue done in cooperation with Frank Dubé.

This reissue also includes the previously unreleased Proyecto B recordings from 1974, which were meant to be the second Proyecto A album. Recorded at EMI studios in Barcelona but never released at the time, this features Frank Dubé backed by famous Spanish prog band Iceberg plus sax / flute player Juan Mena (ex-Máquina and Eddie Lee Mattison Band).

This will surprise anyone into Latin-Funk-Psych and Library / Cinematic sounds. Lots of killer flute, drumbreaks, Hammond, Fender Rhodes, electric guitar…Including tracks like the cosmic “Missatge espaial d’amor”, conceived by Frank as the soundtrack to the first sexual intercourse in space. 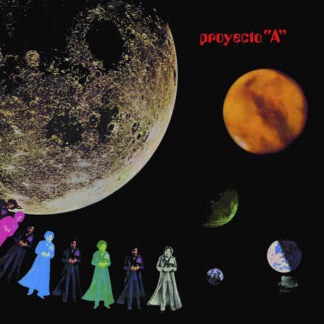 You're viewing: Proyecto A + Proyecto B
Add to cart