Formed in Glasgow in the early 70s, White Light were not an ordinary Xian rock band: influenced by the explosive sound of The Who, the hard blues of John Mayall’s Bluesbreakers and even Black Sabbath, their live performances across the country featured heavy rock sounds, feedback howling round, phased lighting effects and commitment to the real enjoyment of Rock Music. They weren’t formed to play in churches – but to take The Message to the rock generation in loud clubs, halls and big rock venues.

In 1972, they were finalists in a national rock competition organized by Melody Maker magazine. This event encouraged the band to enter the studio for the recording of their first album. “Parable” was released as a private pressing in 1974. Housed in a mysterious looking cover, the music is Xian hard psych straight from the garage with lot of raw fuzz guitar and Vox Continental organ. Combining hard-rock with heavy blues and dreamy moments, it features the monster sidelong track “Prodigal”, which has to be heard to be believed.

First ever reissue of this ultra-obscure private pressing (as featured in the last Hans Pokora’s “7001 Record Collector Dreams” book with the maximum scale rarity). Done under license from the band members.

Insert with liner notes and photos. 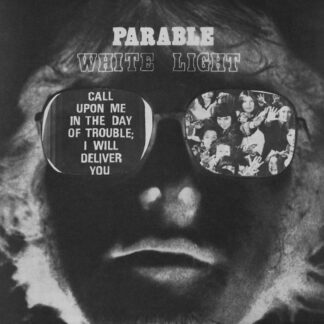 You're viewing: Parable
Add to cart