We are true to the principles of the first “¡Naino!”. Flamenco rumba fusion which in the hands of intrepid producers becomes Catalan Rumba under the influence of sounds coming from Cuba and Puerto Rico in the early 1960s, Rumba Pop under the umbrella of the British Invasion and American pop of the late 1960s, and Disco Rumba with the arrival funk and disco from the USA in the mid-1970s. Everything happens thanks to a flourishing record industry located mainly in Barcelona with labels such as Belter, Discophon or Vergara. After the death of the fascist, sanguinary dictator Paquito Franco in November 1975, the international record industry establishes in Madrid through major labels CBS, RCA, and a new fusion led by producer Jose Luis de Carlos and labeled as Gipsy Rock, Caño Roto or, in the Flamenco field, especially in couplets, Flamenco Pop. As Oriol Farràs pointed in the previous volume, rumba moved from tablaos to discotheques, understanding the concept of discotheque at that time with a slightly different meaning and less conditioned style-wise.
The selection on offer here complements volume one. Starting with an A side packed with floor fillers, with Peret’s “Chavi” as the top example of gypsy funk fusion under production of Josep María Bardagí and Josep “Rabbit Rumba” Cunill, and four examples of the answer to that sound as produced by Jose Luis de Carlos, showing the four cardinal points of this fusion success: Las Grecas, Los Chorbos, El Luis and Chango. De Carlos transforms the sound of Madrid’s flamenco artists spicing it with soul, rock, glam, dub, funk, disco and gospel. These five opening tunes alone could feed a whole scholar course on the possibilities of rumba fusion and its incredible dance potential.
Back to the record. There are not only examples of Afro-American flavored fusions. Progressive rock and Anglo-American psychedelia of the seventies are also influences represented here. They started a path that would later be known as “rock progresivo andalúz” (Andalusian progressive rock) with a crowded band scene and a hardcore hash impregnated following. But before reaching that point, here are some early efforts on side B. Synth-fueled rumba with Canterbury sound inspired electric guitars. A sound that, as it happened with rumba funk and flamenco pop, also had its moment of glory with the arrival of bands and solo artists such as Triana, Gualberto, Smash, Storm or Medina Azahara, or even the more blues-rock oriented Pata Negra. 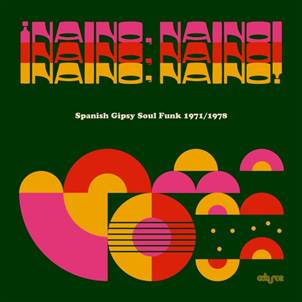