¿-otherSide records proudly presents the collaboration with the legendary Greek composer Mimis Plessas, releasing 2 albums with original score from movies of the era 1960-1966, first time ever pressed on vinyl.

The recordings at the third album are coming from the movies “One girl for two men”, “Tears for Electra”, “Barefoot Prince”, “Nights at Miramare”, “Forget poverty and live it up”, “The heirs”, “Goodmorning Athens”, ” The Gambler”, “There is also pride”, “Christina” and “Betty is getting married”, where the composer played an extraordinary jazz music, flavoured with oriental groovy and 60’s modern pop sounds.

The sleeve have been printed at heavy deluxe carton of 350 gr. and includes a 2-page insert with the movies’ credits plus first ever released photos from the backstages of the movies. There are also included 3 mini posters, replicas from the original promotional posters of that era. The final sound master was made from Yiannis Kyris and there are pressed 250 white color and 250 black color vinyls. 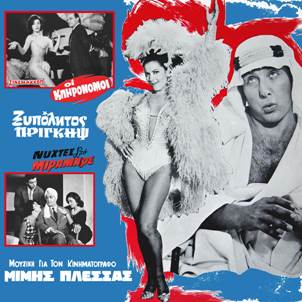