First ever reissue of this classic recording
12 page booklet
In an interview with Jazz Magazine in the early 1970s, Dharma, as a collective voice, outlined their method: “we try to reach, within free jazz, the same sort of rhythmic cohesion as in Bop, a cohesion based not exactly on tempo, but something which feels like tempo. A kind of underlying pulse”.

Evidence of these ideas can be heard immediately on listening to Mr Robinson, the first album by the Dharma Quintet, for whom community living seemed obvious, in order to add to the aforementioned cohesion. Through this, the group members played together on a daily basis, trying out things which were worked on day in, day out. They were also listening to a lot of records, with of course a preference for free jazz, but not forgetting Miles Davis in his electric period, notably for the keyboards of Keith Jarrett and Chick Corea. To which should be added esthetical-political concerns based on a refusal of hierarchy, and a desire to escape from a restrictive academic approach… 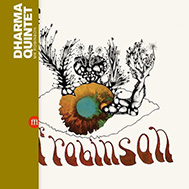