Long awaiting to find its due place in the pantheon of 60s and 70s European progfolk, acid folk and psych folk gems that have been mushrooming over the recent years, Full Moon’s first release, Moon Fools, is finally brought back to life. Originally released in 1976, as a limited private pressing of 500 copies that were mostly sold in gigs, Moon Fools is a never-ending journey to the East, a constant interplay between darkness and light, in quest for musical illumination. Foregrounded by an instrumental dialogue between Johannes Luttik’s (guitar) unique mannerism and Lucas Amor’s (R.I.P) tantalizingly weeping violin, a mesmerizing tapestry unravels from start to finish. Every second is like a chronotope that combines Johannes’ memoirs from his musical expeditions in India, with Lucas’ travels to the Middle-East. Driven by Norman Halsall’s slowly, yet seethingly climaxing tablas/bongos, the compositions alternate between utmost lyricism and free-floating jams.

Moon Fools is reissued by PQR-Disques plusqueréel, fully remastered, and includes exclusively a cd with the previously unreleased album Eternal Rhythm (recorded in 1976). 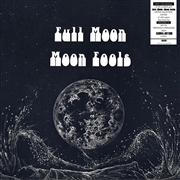