Jaguar mine the sounds of the Colombian Caribbean and global dance sub cultureson a debut album that veers between psychedelic salsa, taut cumbia-disco and zouk party jams.

Rave culture never hit Colombia in the 90s – an internal civil war and a music industry fixated on blandness and payola made sure of that – but if it had then Jaguar would have been one of its leading lights. On their debut album this Colombian duo excavate the sound of their country’s dance floors, uniting the classy, brassy sounds of cumbia, porro and salsa with the earthier DIY vibrations coming from Afro-Colombian street parties on the coast, melodies and guitar lines learnt from imported African vinyl filtered through drum machines and hand-painted picó sound systems with the bass so high it threatens to knock you over. The twosome mark out their stall on album opener “Bailalo Tu También” (“You Dance It, Too”), urging all to come and dance on a tune that references champeta (the #1 sound of Afro-Colombian block parties), zouk and calypso, as well as doffing a cap to disco and Brit funk, uniting the underground dance cultures of Colombia, the Caribbean, New York and London in one fell swoop. The cumbia card comes out on “Contra La Corriente” (“Against The Tide”), which with its subtle influences of global bass and minimal post-disco gives this classic rhythm even more thrust. “Ten Presente” (“Keep In Mind”) represents another side step, a salsa orchestra stripped down to just vocals, percussion, killer horn section and raspy charango, with the groove never in doubt.

Yet, if 90s rave culture represented a response to the darkness of the 80s, then something similar is at play here, the image of the Caribbean as a warm, happy and danceable place coming in contrast with the poverty that is the reality for many living there, and this dark underbelly is not ignored by Jaguar. “Is it possible that the people united could become invincible?” they ask on “Guadalupe”, offering a message of hope that one day the inequality, poverty and neglect that is everyday life for many people in Colombia will be diminished by getting behind the same cause.
Driven by an 80s-inspired zouk beat, they dream of there one day being a united people with the strength to fight back against the authorities. “¿Será posible, será posible?” they sing, “Could it be possible, could it be possible?” This dichotomy of emotions crops up again on “Siguele El Paso” (“Keep Up”), a pure Caribbean groove that is impossibly infectious with lyrics that speak of keeping those hips moving but can’t help but mention reality, the protagonist of the song dodging bullets and nefarious forces while still keeping their rhythm on the dance floor. It’s a perfect encapsulation of Jaguar’s modus operandi, this is music to make you dance, but it remains grounded, in Colombian and Caribbean musical idioms as well as the hard times that many Colombians are living through. It’s a rhythmic elixir, but with bite; rum straight from the bottle. 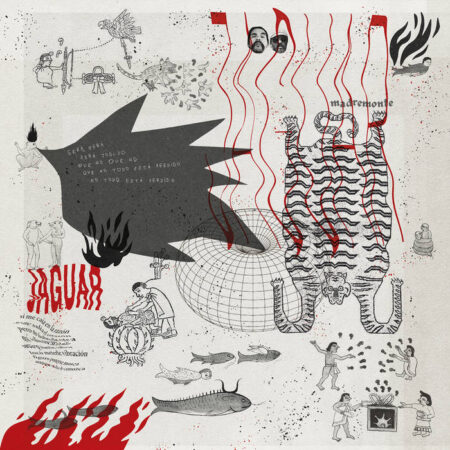