U.S basement psych-prog monster released in 1979 as an ultra-rare private pressing of 200 copies.

MacArthur were formed when a young guitar player and songwriter named Ben MacArthur met a 17-yeard old prodigy musician called Bill Heffelfinger in Saginaw, Michigan, in 1978. Bill was not only a gifted guitar player but also a genius arranger and keyboard wizard. When Ben showed him some of the stuff he had written, Bill took the songs and transformed them into classic pieces of music. They soon recruited Jeff Bauer on bass and Scott Stockford on drums. The chemistry of MacArthur was born.

The first MacArthur album, known in collector’s circles as “The Black Forest” due to the vinyl bootleg of the same title released in the 80s, was recorded in 1979 using a four-track machine. Produced by Bill Heffelfinger, “MacArthur” is a progressive / psychedelic concept album highlighted by devastating, ripping fuzz guitar solos and Mini-Moog / analog synths attacks.

Due to the lack of funds, the album was originally issued by the band in a primitive hand-made sleeve with just a sticker on front and a paper sheet with the credits glued on back.

Booklet with liner notes and photos

Light Up – Laughing Like A Lark – Generations / First Contact – Push On – Of Only Then – The Black Forest – Prelude No.1In C Major – The Shock Of The New 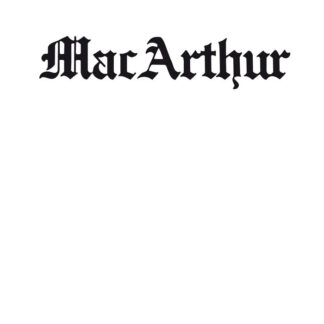 You're viewing: MacArthur
Add to cart