In France, in the years 1960-1970, musicians pondered over how to transpose the political struggle of free jazz onto a completely different political terrain. One of the first to do so was pianist François Tusques (agitator, theorist and militant) who recorded Free Jazz, and then continued with Le Nouveau Jazz, French equivalents to the American New Thing. The word spread, and was picked up by the Free Jazz Workshop which became the Workshop de Lyon in 1975 with the arrival of clarinetist-saxophonist Louis Sclavis.
Still a source of joy, this lyrically feverish second album maintains a narrative dimension however subtle the textures developed through the contrasting collective improvisations. With their ever-inventive melodicism, the Workshop de Lyon invent an imaginary folklore on this album which is unlike any other. It is a knowing mix of the avant-garde and the traditional, collective playing vying, with panache and complexity, with the inspired urgency of the soloists. Even without filmed images the theatricality and humour of the group’s live performances, essential components of their identity, can be felt during the long thematic suites which are both expressive and full of joy.
What better way to honour their imaginary mentors, Albert Ayler or the Art Ensemble of Chicago! More, More! 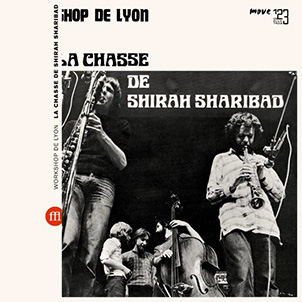