B2B Contact us Log InRegister
View cart “Heaven’s Gonna Be A Blast” has been added to your cart.

Heaven’s Gonna Be A Blast

Buoyed by the confidence developed during the “Spirit Of Elijah” sessions, Wilson McKinley’s third LP from 1971 maintains the quality songwriting but adds even better production values. It was housed in a suitable-for-black-light jacket printed with neon inks. Sadly, after this there would be no more Wilson McKinley LPs, with their next release being the cassette-only “Country In The Sky.” Good news is that they made this day-glo-adorned proof of their rapidly-developing skills and musical interests before abandoning wax-Wilson McKinley’s most adventurous effort, boasting entirely original tunes and complex, heavy arrangements at times reminiscent of the Allman Brothers. Obscure Oxide and Lion Productions are proud to announce a brand new, 100% legitimate high-quality vinyl pressing of this classic LP, using exclusive transfers from the original analog reels, with all lacquer cutting and plating done under one roof for the most accurate sound. The bands’ longtime associate Timothy Smith has written detailed liner notes for a new insert, featuring vintage photos and press clippings. Original jacket artwork and label art are faithfully reproduced. “The third Wilson McKinley album is much less known than Spirit of Elijah, but is arguably as good… it has a similar sound and feel. Heartfelt and warm singing style, and the band gets a groove going on every single song.” -Acid Archives.

The first vinyl reissue of these Jesus-Rock pioneers’ 1973 LP.

Cut from uncompressed, unequalized transfers of the original analog master tapes-heaven for your ears! 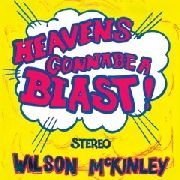