From the ashes of 60s garage band The Lemon Drops comes power trio Buzzsaw with their loud heavy-psych sound. In the late 60s, The Lemon Drops, one of the finest garage-psych bands from Chicago (of “I Live in the Springtime” fame), relocated to the West Coast, where they gigged around and tried to secure a record contract. After a three-day “strawberry acid party” at manager Dan Herron’s mansion, the original band disintegrated. And that’s when power trio Buzzsaw was born, featuring Eddie and Gary Weiss (both Ex-Lemon Drops) on guitar / drums respectively and Rick Fertel on bass.

Buzzsaw was the perfect vehicle for Eddie Weiss (whose use of fuzz & distortion was the trademark sound of The Lemon Drops) to push his guitar and effect pedals to the limit. The trio used to visit “Starhill”, Neil Young’s old sawmill in La Honda, where they rehearsed & wrote songs. The photo used for the front cover on this album was taken there.

In 1971, Max Weiss (Creedence Clearwater Revival’s manager) expressed interest in the band, so Buzzsaw entered Ampex Studios in San Francisco (the place where CCR had recorded “Suzie Q”) to lay down some tracks. They also recorded some material at Pacific Sound Studios. All of these recordings were produced by Roger Weiss, the original producer of The Lemon Drops and co-owner of Rembrandt Records.

Sadly, Buzzsaw only released one 45 during their short lifespan. And it was a frustrating release, as it included a recording from the Lemon Drops era on the A-Side backed with a new song which didn’t reflect the real sound of the band on the B-Side. That 45 went nowhere, Buzzsaw split and the recordings they did at Ampex and Pacific Studios remained unreleased until 1995, when some of them were included on “From Lemon Drops To Acid Rock”, a Buzzsaw CD compilation by Cicadelic Records.

Our Buzzsaw double vinyl retrospective includes all the tracks from the previous “From Lemon Drops To Acid Rock” CD plus some amazing recently discovered acetates and unreleased master tapes. The music is orgasmic ’71 heavy-psych / proto-grunge in the style of Hendrix and Blue Cheer with killer fuzz-wah guitar and melodic vocals. Eddie’s guitar sound is just insane…despite the vintage ’71 date, some of his playing would not be out of place on a High Rise or Ty Segall album.

Remastered sound from the original tapes and acetates.

1. Saturn Is Just A Few Days Away 2. Death Calls 3. Linda In Rhinestones* (Recorded as Watermelon) 4. U.S. Chick 5. Roll Your Green Grass On 6. Walkin’ Through A Rainbow

1.I Really Like To Blow Your Mind 2. In The Country 3. The Sun Just Come Up On The Other Side 4. Gotta Be Rock’n’Roll 5. Saturn Jam 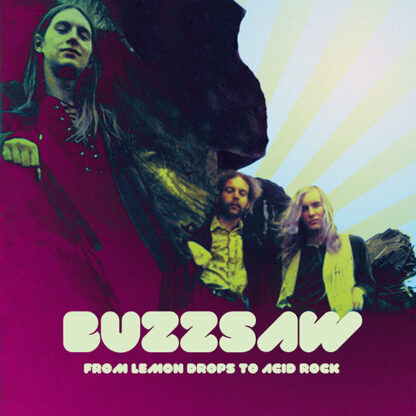