Angelo Noce Santoro is a guitar player with over forty-five years of musical career. A founding member of legendary psych-prog band Cosmic Dealer, Angelo has recorded and released albums under his own name and he’s also behind projects like Palmeira (the first Dutch band playing Brazilian music), Santoro Brothers and Oriental Guitars among many others. His unique guitar playing, which incorporates surf, psychedelic, jazz and Oriental influences, has received praising from connoisseurs of obscure instrumental sounds such as Jello Biafra, who got in touch with Angelo after discovering one of his solo albums in a second-hand shop in the 80s.

“For You” was Angelo’s first solo effort, released as a private pressing in 1979 on ANS, his own label. Angelo played bass, acoustic & electric guitars, flute and percussion. He was joined by ace flute player Steven Bishop, drummer Herman Muller and Lodewijk Hulsman on acoustic guitar. Most of the tracks were written by Angelo prior to 1979, with some of them dating back to the early 70s when he was with Cosmic Dealer.

CD comes with two previously unreleased bonus tracks from 1979: a second part of “Raindance” and a cover of João Gilberto’s “Undiú”. 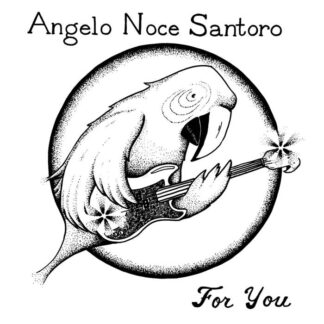 You're viewing: For you
Add to cart