Flamenco Pop. Just like any other label, it is born out of the need to define in two words a series of songs that share a same stimulus. The term was coined in the late sixties on the eponymous record released by Alfonso Santisteban (Madrid, 1943 – Málaga, 2013) & Rafael Ferro “Flamenco Pop” (Sintonía, 1969 / Música para un Guateque Sideral, 2018), an easy listening wonder with a bossa nova edge that takes flamenco elements and melodies to recreate sophisticated instrumental atmospheres. Santisteban had previously produced recordings for Bambino, Lola Flores, La Polaca or Chacho, and was a renowned soundtracks composer. His pop flamenco shows were more an environmental sound that a pop one, but the label “pop” used as a diminutive for “popular” sets a pace for imagination. Santisteban, Adolfo Waitzman (Argentina, 1930 – Madrid, 1998) and Augusto Algueró (Barcelona, 1934 – Torremolinos, 2011) were the triumvirate of arrangers / conductors / producers who defined the genre and took it to the charts of the era. Waitzman, who married stylish singer Encarnita Polo in 1969, took her wife to the top of the charts with the single “Paco, Paco” (RCA, 1969) first, and with the LP “Encarnita Polo y Olé” (RCA, 1971) two years later-an LP on which he mixed his love for The Beatles’ “Sgt. Pepper’s Lonely Hearts Club Band” with popular couplets (or “coplas” as we call them in Spain defining a whole genre) written by Quintero-León-Quiroga, Sevilla’s very own answer to Holland-Dozier-Holland at that time. He had previously produced some beat and prog-rock outfits like Canarios, Pop-Tops or the legendary UK ex-pat band The End. Last but not least, Algueró, who married the explosive Carmen Sevilla in 1961, who had already attempted to mold his wife’s flamenco talent on the “Flamenca Ye-Yé” 45 (Philips, 1965), was also a key character in the era thanks to his many soundtracks, among them the iconic “Tuset Street” (Philips, 1968).

The selection of this compilation has a bit of everything. A pack of exuberant “copla” singers presented as a folkloric mod squad: Carmen Sevilla, Encarnita Polo, Rosa Morena, Dolores Abril, Carmen Flores (Lola Flores’ sister), Dolores Vargas “La Terremoto” and La Polaca. To name this line-up back in the seventies in front of a Spanish “macho” was an instant activation of his lust.

Pointing out this idea today is possibly a crime of female objectification. On prosecution we’ll have Manolo Escobar, Juanito Valderrama, El Principe Gitano, El Noy, Moncho, Richart and Los Nevada. If someone had told me these names a few years ago I would have bet they all came from a typical sixties Spanish film by Mariano Ozores, but do this: drop the needle, close your eyes, hear their stories – no matter if you know the artist or not – and try to fit it in its time (the 1970s, Franco’s Spain, grey colors, austerity), but above all do listen to the music. We should refund your money if at any point you think “wtf?”. And if your imagination can’t go that far, just look for the clips on the films mentioned below. 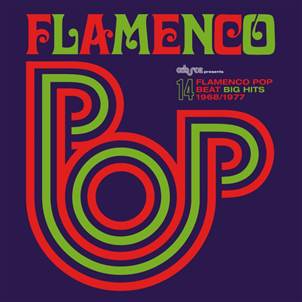