If a jewel were to be chosen from among the more than three hundred soundtracks composed by Maestro Stelvio Cipriani during his long and prodigious career, the choice would probably fall, rather than on the now super famous ANONIMO VENEZIANO, on this previous and somewhat less celebrated score: FEMINA RIDENS, which, together with MARK IL POLIZIOTTO is one of Cipriani’s most iconic titles. Indeed, this is one of those soundtracks that best represent the spirit of Italian golden age film music, and the original LP, published on CAM series SAG – 9017, is at the very top of every collector’s most wanted list.
Cipriani perfectly captured the mood of Piero Schivazappa’s 1969 film, a feminist parable blending eroticism with black humor and Pop Art. The maestro combined classical music, orchestral pop and baroque jazz with spaghetti western, psychedelic blues and lounge vibes – all of this with sumptuous arrangements that still sound contemporary. “Mary’s Theme” is an immortal, timeless track – it has been sampled in contemporary hip-hop productions – and shows the eternal modernity of the finest Italian cinematic sound.
This reissue finally makes available again an iconic soundtrack that remained inaccessible on wax for way too long. And it does so in the best possible way, starting from the original master tapes preserved in the CAM archives, where it was possible to locate an unreleased track, now added at the end of side B. An enhanced version of “Chorus and Brass Fugato”, whose original edit has been improved and extended, is also included. And as if that weren’t enough, Four Flies also released an extra 7-inch record featuring the two most danceable tracks on the entire OST! 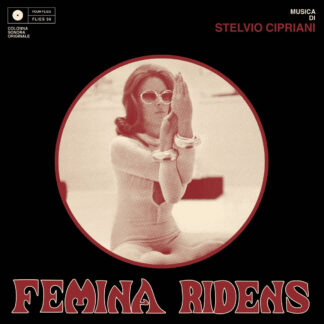