Those two über-hip expatriate Colombian ‘salsapunks’ are back. Contento’s first album, Lo Bueno Está Aquí, was an artistic and critical success: chosen, for example, by the UK’s discerning national newspaper, The Guardian, as their global album of the month in November last year. Their follow-up, En Lancha Pal Futuro, builds seamlessly on its predecessor. Yet it could not have been recorded in more different, and difficult, circumstances.

The duo’s debut was laid down between 2016 and 2019, a period when the two European-based Colombians, who met at an Eddie Palmieri concert in Berlin, were able to take some serious time off from their diverse individual projects to explore a new vision for salsa. Paulo, a member of Acid Coco, Jaguar and El Dragón Criollo; and Sano, a DJ and producer known for his minimalist Latin house releases for the Cómeme label, crystallized on their debut what Paulo describes as “a new salsa sound that may also make [listeners] want to discover some of the older sounds, too.” That sound is a kind of ‘retro-smart’ combination of Nuyorican boogaloo from the ’60s and cumbia from the golden age of Discos Fuentes. Contento’s contemporary electronic twist suggests, if you like, a kind of post-modern variation on Dave ‘Baby’ Cortez’s “Happy Hook With an Organ”. 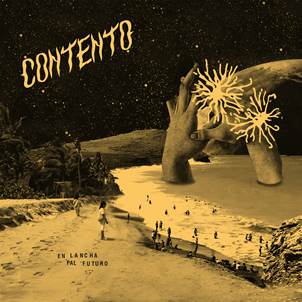