Original album & artwork from December 1966. Limited Edition 300. Black vinyl 180 grams. 350 grams carton sleeve. Japanese plastic bag. In the mid sixties beat groups got quite popular in the Netherlands. The Motions, Golden Earrings, Outsiders and Q65 manifested themselves in the footsteps of The Beatles, Rolling Stones and Pretty Things. In 1966 a new top band entered the scene, this time from Delft.

After the hit singles Early In The Morning and Believe What You Say, songs written by Shocking Blue-guitarist Robbie van Leeuwen, in November 1968 the Tee-Set went into the GTB studio to record an album with all new songs. Stimulated by Harry Knipschild, manager Theo Kuppens and singer Peter Tetteroo, with a voice reminiscent of Stevie Winwood, decided to build Dave Van Ronks Dont Leave Me Here into the party song Dont You Leave.

The reactions to the album were phenomenal. The trendy Hitweek wrote: “The Tee-Set album is, in one word, fantastic. With a sound that is solid like a brick house. This is the Nederlanger [Dutch LP] of the year! We do not get enthusiastic very fast, but this album is incredibly good. The Dutch Beat is on a roll.” ‘Dont You Leave’ became the Tee-Sets first top 10 hit. The album was also a great success. Unique in that time: Emotion was also released in Italy. Tee-Set continued. Ma Belle Amie became a worldwide hit, and even landed in the U.S. Top 5. She Likes Weeds was a number one in the Netherlands. The fantastic first album Emotion has now been remastered from the original master tapes for the first time. It sounds better than ever and is available with the original artwork. Enjoy the breakthrough of the Tee-Set. 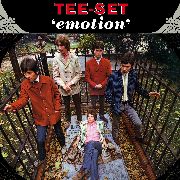