When Daniel Grau, Venezuelan producer and musician, achieved his first success in 1974 with “Dejando volar el pensamiento” he personally brought the tapes from his home studio to Caracas radio stations. On his own, with all his singles, great legendary songs like “El tren del espacio” (1978), “Atlantis” (1979) and “El León Bailarín” (1980), to name a few, described by many as the “magic sound of Daniel Grau” were made almost artisanal and self-promoted. Through 10 years of productive work from 1974 to 1984, he never imagined the ups and downs ahead of him and much less that his country would suffer a future debacle that would lead it to a downward spiral. His abrupt silence in the mid-80s after 9 magnificent albums is still an enigma. What happened to Daniel Grau? Where is he now? El Palmas Music, a new record label in Barcelona may finally bring the answer to you: Grau has been always there, he’s still alive and running, and never stopped composing in the same home studio where he started 45 years ago.

Having contacted Grau, El Palmas was allowed to access his current work, and finally decided to end with his long silence. In this, his first release as a record label, they bring to life a completely unpublished work of Daniel Grau. “El Mágico Mundo de Daniel Grau” (2019) presents 8 new songs to give him back a voice. This album offers a fusion between Space Disco and Smooth Jazz that connects us directly with his previous work, however, on this basis Grau is building an amalgam of styles resulting from his experience over these years, freeing his work from any classifications. El Mágico Mundo evades the vacuous exactitude and automatism like water to oil, Grau offers a humanized sound from synthesizers and sampling of instruments, music that he has played, sweated and, definitively, lived in the flesh. Different ingredients come and go introducing us to a singular world, the “magical world” where Grau wants to tell us something, we find his old footsteps and his new elements touch us, pop synths are suddenly colored with textures, reminiscent of the disco era piano are wrapped between brushstrokes and ornaments of funk and soft rock. In general, Grau invites us to a sensory reconnection with sounds that he has collected in his head for 30 years, striking elements that we can imagine as a living thing against a world almost numbed by the automation of production tools. The album is released in vinyl LP and has been produced, recorded, mixed and mastered by Daniel Grau under the executive production of Maurice Aymard.
Two singles are extracted from the album whose sounds summarize this proposal immediately. ‘Freedom’, the first cut, is a sensorial journey in smooth jazz where a delicate progression of chords serves as the basis for the succession of different phrases of synthesizers, an almost libertine hedonism from start to finish that features a video made by Grilled Cheese Studio. The second one ‘Dance with me’, opens the doors to a world of disco music, but in the Grau way, oneiric, synthesized, spacey, located in a crack between decades, 80’s and 90’s, synth imaginings of funky brass, pianos and strings apparently made for dance floors that dialogue with reverberant guitars and sampler textures.
El Palmas Music in this inaugural release wants to return Daniel Grau to music, allowing him to continue offering us new sensory experiences, as long as time permits. Although it is his first record after years of silence, Grau shows us that he has never been exactly still, nothing is further from reality, he is active and his challenging personality is intact. 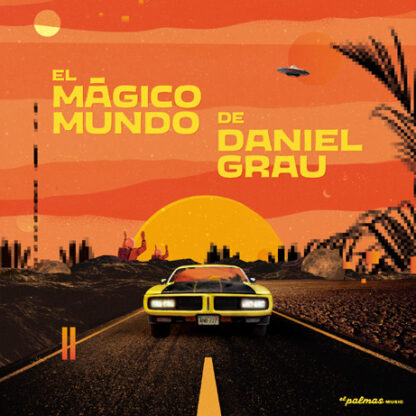