“Ultra rare mid-70s UK acid folk rock recordings. Features sitar, moog, acoustic and electric guitars, assorted percussion instruments to create a Popul Vuh like soundscape. If you can imagine the perfect blend of Eastern trance/psych and English hippy acid folk rock, this would be it. Very cool and freaky.”

“Earthforce were an offshoot of Ebling Mis and Oa Band formed by Steve Bayfield. Hailing from the UK, the band was influenced by a wide variety of music including English folk and acid rock. This release is culled from sessions that have never been released before, and they sound like a cross between Popul Vuh and Gong. Very tasty, very spacey and mystical vibe throughout.”

I doubt whether the name Earthforce will be familiar to many, mainly due to the fact that they merely existed for a couple of years, with only a 60x copy private press cassette release in 1977 to their name during their time together. Earthforce were a musical collective out of step with the punk age, children of the UK free festival scene — events like the Psilocybin Festival — enjoying a connection with the earth, singing meditative songs with lyrics about the “moontide of the pagan heart” and the “wind blowing seaward.” The end result is a fantastic album, loosely charting the course of a day, from dawn to moonrise. The diverse instrumentation (sitar, 12-string guitar, flageolet, electric guitars, fretless bass, harmonium, doogi, synthesizer, acoustic guitar, percussion, tabla, cymbals, etc.) are used in ways which bring unexpected wonders to the Earthforce sound.

And if the late date of Earthforce’s existence is at all worrying to you, as you probably remember, Caedmon’s legendary debut album, also released as a private pressing — and one of the most sought-after progressive folk-rock albums from the UK — came out in 1978.

Had Earthforce opted for vinyl instead of cassette for their release, we have little doubt that an Earthforce LP would be at least as sought after as the Caedmon LP — and so, with that idea in mind, we have made an Earthforce LP.

The first ever vinyl issue of these recordings

Comes with a 12-page full color booklet with band info, photos, and lyrics 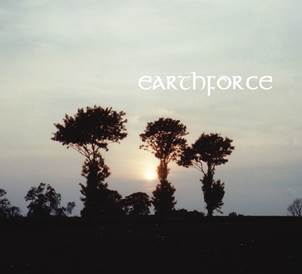