A wild, science fiction-themed library LP by French composer Bernard Fèvre. Released in 1977, Fèvre imagines a far future populated by space-age electronics and lush, vivid melody.
“Cosmos 2043 (released in 1977) is best known for “Earth Message”, which was sampled in “Got Glint” by The Chemical Brothers.

“The cover is a rather naïve drawing that I drew myself because I have little talent there. I like the idea of abstraction in my work: “Skeeze” and “Weekee Way” are words that have no inherent meaning, like music in general. But if you have a working brain (and you aren’t a robot), these words will indicate a direction, suggest an image, evoke a feeling, or make you laugh. Art can touch the mind, body, heart, and even the feet! For the title, I chose the date 2043 rather haphazardly – it had to indicate a distant time, far away. I imagine that in 2043 life will be harder and the weather much warmer, and truthfully I do not know… unless a fairy comes along…” B. Fevre 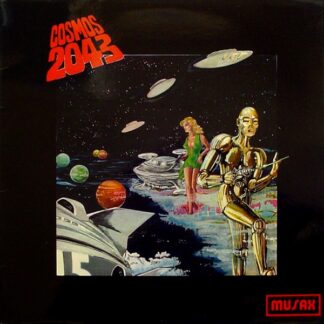