El Palmas and El Dragón Criollo once again leave their skin immersing themselves in the musical archives of the” Venezuelan Saudi “, today almost buried in oblivion, for the defense of prodigious works whose brilliance did not have time to be fully assimilated in the middle from the hectic pace of the city. This is the second installment of Color de Trópico, they do it with the same acuity that already characterizes them to provide us with even more incredible music, that which shows us the nuances and musical needs that were generated in the social folds of a Venezuelan society in full oil economic boom. In addition to the search for that Holy Grail of “one’s own identity” in the midst of the international explosion of musical trends, the need arises to express the consequences that the urban explosion and unbridled growth had on society.

Color de Trópico Vol. 2 confronts us with a new expressive rebellion, that of the new heterogeneity, the diversity of the new social organization and the struggle for survival. New styles raise their voices, in the face of all this urban complexity we already know that traditional genres, far from reacting passively, returned to the charge of cumbia, joropo, merengue coexisting against rock and roll, but this rock and roll opened the doors and it evolved with them in the form of rock (just), pop, soul, jazz, highly sophisticated funk. But, as we can see in Color de Trópico Vol 2, the influence of Caribbean modernity also stomped on with new rhythms such as ska, rocksteady, reggae, originating in Jamaica and represented in Venezuela by the group of brilliant good vibes such as Las Cuatro Monedas and its theme “Buena Suerte.” Salsa also arrives, still grown only in New York, San Juan and Cali but which now extends to Caracas and of which the tasty “María La Bella” by Nelson y sus Estrellas stands out. The mixture is the reality of the social network of the city, chaotic, dynamic, incessant, recipient of massive migrations from all parts of the country, mainly from rural areas to the capital, but also from Colombia, the Caribbean, Europe, everything to a speed faster than it could have the ability to be assimilated. It is the one in which Venezuelan middle class also begins to make his trips to the United States habitual. This context cried out for more music to ease the tensions between so many influences, here it is groups like the psychedelics of Grupo Almendra that add Latin percussion to their rock band flirting with trends such as disco music or even samba in “Tutti Frutti” or the powerful brass section of the reference jazz band in Venezuela, such as La Retreta Mayor, with its funky jazz “Líquido Elemento”, a spectacular vision of a Caracas that never sleeps between textures of saxophones and trumpets in its wide avenues. We can almost place ourselves in the hedonism and luxury that the capacity for waste made of the capital a cosmopolitan society open to cultural, musical and social multiplicity where thousands of planes coexisted, intertwining (and also colliding) without there being a way to solve future ones.

When it comes to encompassing a corpus as complex as the music of such a dynamic country, a special subtlety is required, which is why El Palmas and El Dragón criollo have wanted to leave their skin in the choice of this album, synthesizing their own vital experience ( Venezuela and Colombia), his travels over the years collecting hundreds of records that today are priceless jewels and almost impossible to get if you don’t go deep into the guts of Caracas. They show us in Color de Trópico Vol 2 the versatility that musical groups usually have in Venezuela, in which the sophistication and vision that they already had at this very important moment continues to surprise us. In the face of social aggressiveness, the avid heart for music appears, ready to collect the soundtrack of the cosmopolis that, along with politics, was breathed in everyday life, a space for enjoyment, raw, sensual, open, uninhibited, where all planes merge into one, as well as couples under the dim lights of the nightclubs that multiplied throughout the city, or in ambitious and massive concerts, or even, in sports games such as baseball, that although they come from outside, inspired in the color of their own they also unleash love. 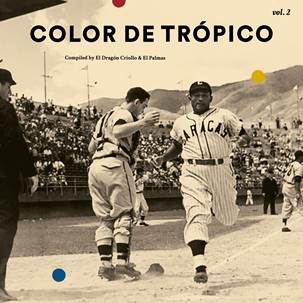